Exhibitions and trade shows began long before they received their names, when local merchants would set up booths that advertised their goods for sale. Aviation debuted its first international air expo in U.S. history in 1959, according to Exhibitor Magazine:

"When the Las Vegas Convention Center opened in 1959, its inaugural show was the World Congress of Flight, the first international air expo in U.S. history. More than 200 exhibitors from 51 nations displayed products from rubber planes to space helmets for 5,000 civilian and military attendees. Afterwards, guests toured a display of rockets, including the Atlas boosters that would soon launch the Mercury astronauts into orbit. Later on, attendees traveled to nearby Indian Springs, NV, to watch the Air Force shoot missiles and drop napalm on the desert floor."(http://www.exhibitoronline.com/topics/article.asp?ID=1684&catID=103)

Our booth number is 7143, co-located with Dart Aerospace, on the main aisle. Click here for an interactive floor plan and additional details.

Some of our booth features include the following:

Drop by our booth and say hi to Ken Essary and Shane Patterson from Ozark Aeroworks, look around, and grab a promotional product or two. We can’t wait to see you there! 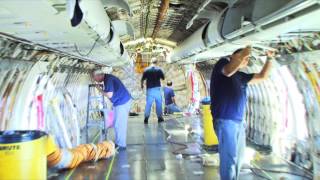 Aircraft maintenance: A big business ran by a majority of small businesses